WHY IT MATTERS ABOUT CAMERA SETTINGS AND ABANDONED PHOTOGRAPHY, 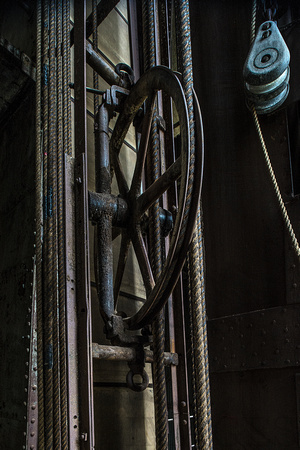 I consider myself a seasoned photographer.  I know my cameras, use the best gear, shoot many different types of photography and learn as much as I can from many sources.  Of course one of my favorite things is trying to capture the essence of abandonment.  Lighting is the subject, dancing along an object sometimes so little of it that you have to really know how to set you camera to make a great image.  You just can't buy a camera and shoot auto everything.  Why not?  Each function of the camera shutter speed, F stop and ISO plays an important role.  They all control light but in a different fashion.   The longer the shutter the more time the film or sensor has time to gather light.  A long enough shutter maybe seconds, minutes or even hours will make a dark room look like daylight.  A tripod is a must.  Keeping your camera still for a 30 seconds is almost impossible without it.  Shutter speed is usually the easiest to understand.  Not really when shooting in the dark.  Slowing down the shutter causes things to happen that an inexperienced person will wonder why the photo is blurry or out of focus.  The above photo taken in an abandoned silo caused me a lot of problems till I figured out why.  Parts of it was out of focus and parts where fine.  I was close to the subject and was using a slow shutter speed, F stop at F8 and ISO of 100.  The exposure was fine. At first I started looking at the depth of field which is the Aperture.  I went all the way to F22 taking several photos checking to see if the problem was solved.  No luck.  Large numbers on Aperture reduces the amount of light so a even longer shutter speed is required.  The longer the shutter speed after 30 seconds requires a bulb mode and you need a timer you can buy or time by a clock.  A good way to see this problem is on a bridge.  Bridges move and if that camera moves, BLUR.  My camera wasn't moving so that wasn't the problem.  I kept looking at this problem till I took a step back and moved a little and then I saw it.  A very small air movement made the pulley swing just enough that the rope became blurred while  the pulley itself was sharp.  Too slow of a shutter speed.  To get a faster shutter speed you have to decide aperture or ISO.   ISO should always be the last resort.  Cameras are better the lower the number and even though the manufacture gives high ISO on the camera it may not look good in the end.  So if not ISO, aperture is the first thing.  I said ISO last, well maybe not.  If you are shooting a scene as I mentioned above going to a lower number on aperture F2.8 will cause the background to be out of focus.  That is good when shooting portraits but if you want to tell a story F2.8  may blur the background to an unacceptable level.  ISO is like a window shade and when you open the shade you get more light allowing the aperture to remain at the higher number.  The higher ISO may cause the photo to be unacceptable in the end.

There is another option. LIGHT PAINTING.  This is adding light much like a photographer using a flash.  Light painting is a more controlled method lighting only what you want.  A flash is not going to give you that rim of light on the arm of a chair because it will be much broader spilling on everything.  I'll take on the light painting for another day.

Working in cold damp conditions in a dark building takes practice using your camera.  Go in the garage or basement and practice on something.

Color Correction Service(non-registered)
This is a nice post to learn how to set a camera for great photos. Very informative and helpful. Thanks.
No comments posted.
Loading...