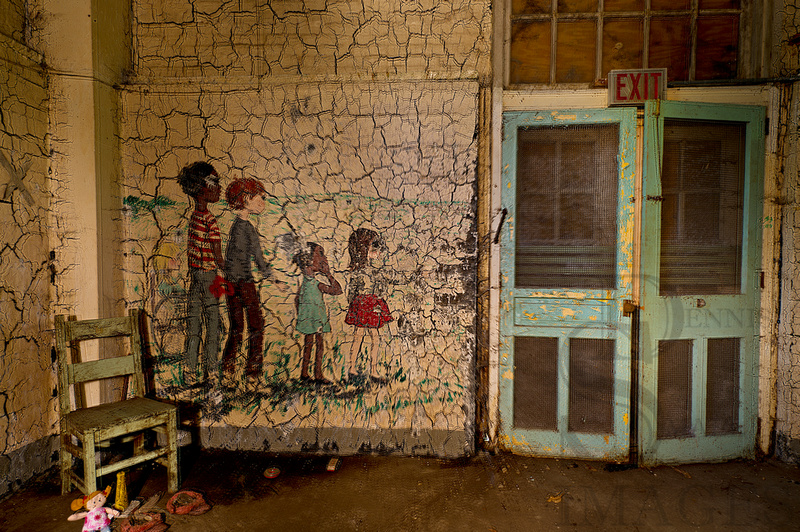 Making an image that brings smiles to someone's face can be hard. Making an image that can bring sadness can be harder but necessary at times.  I have been doing a series of abandoned places.  It's a challenge with low or no light, access restrictions and sometimes thought provoking subjects, not in a good way.  Pennhurst is one of those places that is a challenge of the latter.  You never know what you will get into when you go.  There is never enough of time and after you leave you think of all the things you should have done.  This trip there was too many people to take the time I would have liked to.  There were many pictures that while you were waiting for the 30 second exposure to finish your mind wondered to what actually happened here.  This photo was painted on the wall in a basement of one of the buildings where children came to play.  They called it candy lane because of red and white stripes on a pole with a basket to play ball.  I believe the paintings were therapy for the patients.

I watched as I waited my turn to photograph the area.  I took the common photo of the kids on the wall.  During that 30 seconds I saw something, the door.  I don't know what everyone else sees but to me it is the GREAT ESCAPE.  Pennhurst was a miserable place and I won't say much about it, too depressing.  Take some time and look it up.

Fortunately I am photographing an abandoned place.  To be continued>

I'd like to thank my brother Ken for allowing me to exhibit in his office some of the abandoned photos.