A GEM AT THE BOTTOM OF ICY NIAGARA FALLS 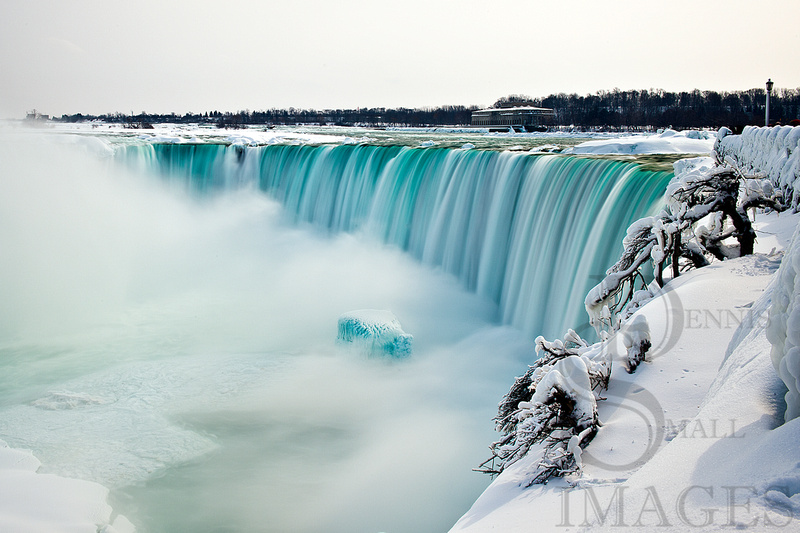 If you want to take better pictures stand in front of better stuff.  SO TRUE.  To stand in front of better stuff a photographer has to be willing to take chances, brave the weather, travel and see things missed by others.  This rock at the bottom of the Horseshoe Falls on the Canada side of Niagara Falls just sits there.  A chunk of the bedrock the millions of gallons of water eats away on a daily basis.  The falls are behind the rock not really hitting it directly however, the mist formed by the falls moves around and over putting a layer of texture and color from the ice that forms.  This rock wouldn't have been noticed in the summer.  But with the frozen falls it was better stuff to stand in front of.  I spent as much time shooting this rock as I did shooting everything else.  The swirling mist changed the light and color as the sun had to work a little to penetrate the thick fog.  I didn't shoot in burst but I did work the shutter finger a lot.  The railing that keeps you from accidently falling over curves a bit as you get farther away from the falls so the angle of view keeps changing if you want it to.  You will have to wait your turn as it is crowded with tourists aplenty.

Wide angle is what you shoot Niagara so you can see the size and power of the falls.  Well to some anyway.  I always tell others that ask what can I do to take better pictures.  I tell them to take the shot they would normally.  Then cut the distance in half and take it again.  Cut the distance again for another.  When the subject is out of the frame you're done.   Of course Niagara Falls frozen or not won't allow you to get closer so get a bigger lens.  Then go bigger.  I went there in February 2015 and the weather didn't give me much time at the falls.  I always travel with all my gear.  I have a 400 mm lens and as I left the vehicle I looked at that lens and talked myself out of it because of the crowds there.  Big mistake and I hope I get another chance.  I did shoot with a 200 mm and most of my favorites from the trip was shot at 200 mm.  There was one person there with the big lens.  Probably a news person and that doesn't mean great photos.  You still have to see the image to take it.

Stand in front of better stuff, get closer or go bigger with the lens and change the angle of view.   For more Frozen photos go to www.dennissmallimages.com/frozen_niagara

Kathy Sherlock(non-registered)
Dennis, this shot is just beautiful. Simple beauty with so much strength. This is truly one of the most lovely places. Your picture is wonderful. This place brings back so may memories. Thank you for sharing your talents with us.
No comments posted.
Loading...